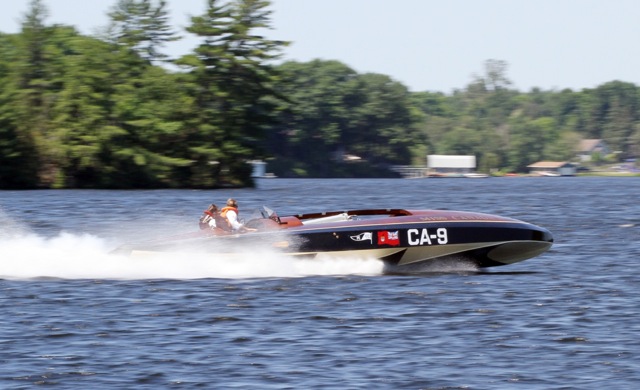 Bobby Genovese’s world famous Miss Canada IV will take center stage at Picton, Ontario’s Prince Edward Yacht Club on October 2 and 3, 2015 to commemorate the 65th anniversary of her historic 200 mph run at the World Water Speed record. Admission for the two-day event is $10.

“Who would have ever thought that Miss Canada IV would return to the waters of Prince Edward County 65 years after Harold and Lorna Wilsons’ attempt at the World Water Speed Record,” said her owner, BG Capital Group Chairman Bobby Genovese, of this inaugural event hosted by Thunder Events of Picton (TEP).

“Miss Canada IV was the first Canadian challenge to the supremacy of the United States on the world hydroplane stage,” said Genovese, who will be joined by members of the Wilson family returning to watch her fly down the bay. “She captured the imagination of the nation, and we are delighted that she will thrill audiences once again. She is a significant part of Canada’s boat racing history, which I am proud to bring back to Picton.”

“This gathering will be a great opportunity for visitors to see many of the race boat legends that competed in Picton,” said BG Vintage Racing Team Manager Jamie Smith, who heads Genovese’s BG Vintage Race Boat and Antique Boat Museum, which is expected to be completed next year.

The anniversary festivities will feature a static display of vintage hydroplanes and race boats including Miss Canada IV and give attendees the opportunity to meet the drivers and crews along with notable celebrities of current and past hydroplane racing fame.

TEP was established to promote boat racing, both vintage and professional, in Prince Edward County. Thunder on the Bay is made possible thanks to financial support from local businesses and individuals with the desire to bring race boat fans back to Prince Edward County. Net proceeds of this event will support local charities, the PEC Heritage Fund, and future events. Thunder Events is owned and operated by Larry Ritchie, Board Director of the Prince Edward County Chamber of Tourism and Commerce and owner of Picton Harbour Pontoon Tours.